The Competition will offer to young chefs under the age of 30 a unique opportunity to enter the Academy and embark on an inspiring and educational journey. There is time until June 30, 2022 to register for the Competition.

During the Regional Finals phase, 170 young chefs from around the world will compete in live cooking competitions in front of local panel of jurors from participating countries in the fifteen different regions. After working closely with their respective mentors to perfect their recipes, the regional finalists will demonstrate their skills in preparing their signature dishes before the Seven Sages.

Believing that passion, culture, innovation and ethics behind a dish will make the difference for a chef in the future, the seven giants of global gastronomy will be entrusted with the great responsibility of pooling their intuition and knowledge to select and crown the final winner. The esteemed jury will honour the brilliant talents capable of pushing the boundaries of gastronomy and inspiring the younger generation of chefs with their personal visions and opinions.
The international jury of this edition line-up international chefs is composed by:

1. Eneko Atxa, the Basque chef owns 5 Michelin stars thanks to his restaurants Azurmendi and ENEKO. With his constant commitment to health, solidarity, and sustainability, he has received numerous sustainability awards. His cultural roots, the connection with the territory and its produce, and traditional Basque recipes have been and remain the foundations of his creations. About mentorship he says: “Our junior chefs start very young with us and learn with us, so educating them on old Basque recipes and traditions is crucial, as well as showing them how to use new tools that allow us to work better. My advice to young talents is to work hard, with a lot of enthusiasm, perseverance, love the territory, and to understand that the food will speak about the chef, about who is, about his territory and culture.”

2. Riccardo Camanini, he is one of the chefs who best understand how to express the new Italian cuisine with technique, elegance, essence, and vision. Michelin star since 2014, just 8 months after opening his Lido 84 in Gardone Riviera, has a solid culinary foundation that comes from the teachings of Gualtiero Marchesi, then refined alongside Raimond Blanc at Le Manoir aux Quat Saison, 2 Michelin stars, and by the pair of Alain Ducasse and Jean Louis at La Grande Cascade in Paris. To young chefs, he says, “Creativity is nothing more than the sum of many pieces of information that we have received over a lifetime and that we have been able to interpret. Pirandello once said that creativity is like a slice of bread: a solid food on which you can spread jam. So, let’s remember that creativity and certain results are the outcome of a long journey of a craftsman, based on time, consistency and perseverance.”

3. Hélène Darroze, as a fourth-generation chef, cooking was always going to be in Hélène Darroze’s blood. Now she is at the helm of a tree Michelin-starred restaurant at The Connaught hotel in London, a two Michelin-starred for “Marsan” in Paris and one Michelin- starred in Provence for “Hélène Darroze à Villa La Coste” in France. In addition to recognition by Michelin, she has been awarded the Veuve Clicquot Prize for Best Female Chef 2015 from The World’s 50 Best Restaurants. Lastly, she has been a judge on the hit French television series “Top Chef” since 2015. Her creative flair brings self-expression that uses emotion as a starting point and is bound by the common thread of authenticity, resulting in dishes and menus full of instinct and emotion, yet always remaining faithful and sensitive to the absolute quality of their core ingredients. “Believe in you, believe in your dreams, live your passion, the sky is the limit“

4. Vicky Lau, she forged an unconventional path into fine dining after abandoning her career in advertising and instead channelling her creative ambitions into professional cooking. She began her career with an apprenticeship at Cépage before branching out on her own and opening TATE Dining Room in 2012. Last year, she made history when she became the first female chef in Asia to be awarded two Michelin stars for her Hong Kong restaurant in the Michelin Guide Hong Kong Macau 2021. To young talents, she says, “As a chef, it’s important to prepare beautiful and delicious food, but we are also looking for more meaning in life. Success is not just about you, but also about how much you can positively impact society. That’s what we should all aspire to.”

5. Pía León, being at the top Latin America’s 50 Best Restaurants list for three years in a row and voted one of the world’s ten best restaurants five years in a row. She co-owns Central with her husband Virgilio Martínez, and helmed the kitchen there for a decade, before deciding to go her own way with Kjolle. The restaurant is named after an indigenous flowering tree that grows at extreme altitudes. It was ranked 21st on the list of Latin America’s 50 Best Restaurants in 2019 and received the Highest New Entry Award. To young minds she says: “It can be difficult at times, but if you have the will and know what you want, things do happen in their own time and at the right moment. The most important thing for me is the people around you who accompany you in your life’s mission and goals.”

6. Julien Royer, he is the Chef-Owner of Odette, a three Michelin-starred modern French restaurant in the National Gallery Singapore. Established in collaboration with The Lo & Behold Group, Odette offers an ever-evolving menu guided by Royer’s lifelong respect for seasonality, terroir, and artisanal products from boutique producers around the world. The name Odette is a tribute to Royer’s grandmother, who has been one of his greatest influences in life and in the kitchen. To young talents he says, “The people you meet along the way are vital to your growth. Never stop learning from your peers, partners, suppliers, collaborators, and fellow creators. It’s important to constantly expand your worldview and open yourself up to other perspectives. Creating an experience is a collective effort, and a great chef is only as great as the team that supports and believes in him or her, working together in harmony to create amazing experiences for our guests.”

7. Nancy Silverton, she is a U.S. chef, baker, and author, who has received the James Beard Foundation’s Outstanding Chef Award in 2014 for her role in popularizing sourdough and artisan bread in the United States. Silverton is co-owner of the Michelin-starred Osteria Mozza, as well as Pizzeria Mozza, Mozza2Go, chi SPACCA, Pizzette and The Barish in Los Angeles. Her advice to young talents is, “I recognized my calling at a very early stage. I still remember that day: I was following the recipe for something as simple as lentil loaf or steamed vegetables and melted cheese, chef’s knife in hand, the pages of my cookbook open, and I thought, ‘This is what I want to do.’ From then on, my path never changed. Becoming a chef is incredibly hard work. Start this professional path only if it’s in your heart and soul.”

The S.Pellegrino Young Chef Academy Competition will offer a unique opportunity for young chefs to participate in the S.Pellegrino Young Chef Academy. Within the inspiring community, they will connect with the most influential and renowned members of the gastronomic world and will receive an empowering programme of educational, mentoring and experiential opportunities.Young chefs under the age of 30 will have the chance to register for the S.Pellegrino Young Chef Academy Competition 2022-23 at www.sanpellegrinoyoungchefacademy.com until 30th June, 2022, by providing information about themselves and their profession and submitting the recipe for a signature dish that expresses their personal vision, unique skill and creativity. As in previous editions, the applications will be evaluated in the first selection phase by ALMA, the International School of Italian Culinary Arts. ALMA will draw up a shortlist of Young Chefs who will participate in one of the 15 Regional Finals that will take place throughout the world in the second half of 2022.

To learn more about the initiative please visit: www.sanpellegrinoyoungchefacademy.com.

About S.Pellegrino and Acqua Panna

S.Pellegrino, Acqua Panna and Sanpellegrino Italian Sparkling Drinks are international trademarks of Sanpellegrino S.p.A., which is based in Milan, Italy. Distributed in over 150 countries through branches and distributors on all five continents, these products represent quality excellence by virtue of their origins and perfectly interpret Italian style worldwide as a synthesis of pleasure, health and well-being. Founded in 1899, Sanpellegrino S.p.A. is the leading company in the beverage sector in Italy with its range of mineral waters, non-alcoholic aperitifs, drinks and iced teas. As a major Italian producer of mineral water, it has always been committed to enhancing this primary good for the planet and works responsibly and passionately to ensure that this resource has a secure future. 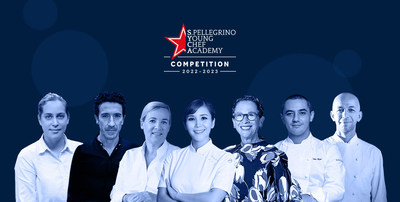